First stage of building of the ski resort “Tufan” in Azerbaijan is finished!

There was an official finishing of the first stage of “Tufan” year-round ski resort building works in Gabala, where Poltava-SKI professionals also took part.

The Azerbaijan economy, powered by the oil sector, in recent time started to develop other directions, including – recreational objects. President Ilham Aliev has declared tourism as one of the main non-oil business sectors and there are already positive results of such activity. Azerbaijan government made the right step and thanks to specific Azerbaijan microclimate they will attract local and foreign tourists. 2011 was named the year of tourism in Azerbaijan. Nowadays this sector of business is constantly growing. 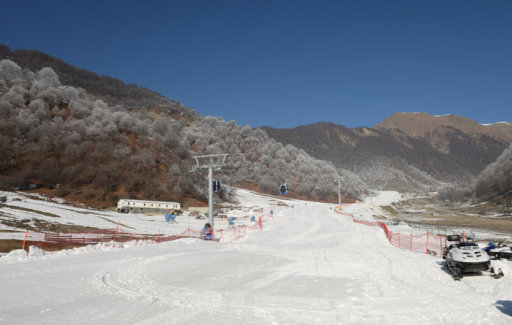 Good example of such growth is all-season ski resort “Tufan” in Gabala which was opened personally by the President Ilham Aliev. First stage of building included 5 (of 10) ski trails, 4 ropeways, restaurants, sport shops and cafes. Trails are equipped with snow system. Building of this recreational object means that a lot of attention in Azerbaijan is paid to development of the touristic infrastructure. This process is going on in the capital as well as in other regions of the country, where different recreational complexes and individual objects are built.
Nowadays ski resort “Tufan” is filled with lots of infrastructure: automobile roads, strengthened slopes (to avoid soil erosion). Hotels, offices and sport facilities are still under construction. Building of new sport center “Qolf Resort” is planned near the “Tufan” resort. One of the main features of “Tufan” resort is the possibility for guests to choose a ski trail according to the difficulty. Passenger capacity of the “Tufan” is 3000 (three thousand) people per day. Today this ski resort is rightfully called the tourist brand of the country.
Poltava-SKI company (who took part in commissioning of the “Tufan” resort) congratulates Azerbaijan colleagues with finishing of the first stage of building, wishes all the best and good luck in building of strong and profitable tourist infrastructure.
--Читайте також

Mountains on Earth were built in different ways

Replacement of ropes in the largest resort in Armenia

Service work at the GD8 Dohuk in Kurdistan was successful